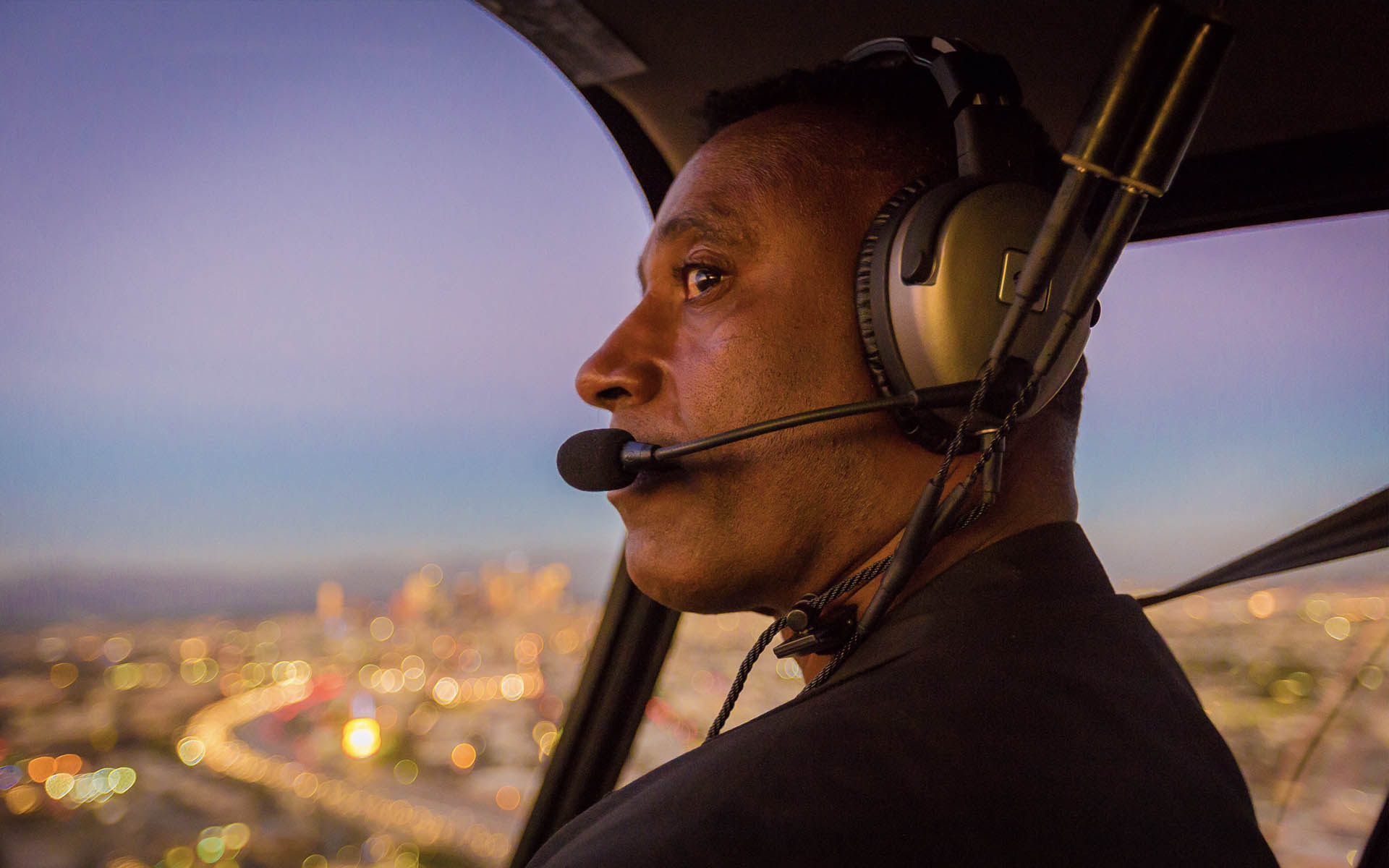 Robin Petgrave is also the Founder of: Tomorrow's Aeronatical Museum Born to fly, Jamaican native, American raised Robin Petgrave has accumulated over 10,000 hours of flight experience gracing the skills conducting helicopter tours, charters, flight training, ferrying helicopters, and entertainment industry production work. A director and producer’s dream, Robin’s deft flying skills, uncanny sense of production timing, and a photographic eye for “the money shot”, gets better results than originally planned, saves on aerial sequence production costs, and makes the production crew and talent look great. Robin wowed a skeptical movie crew by landing a helicopter where no one thought possible-not once but eight times in Dr. Dre’s backyard during a movie shoot. He is impulsive, free-spirited, and a big kid at heart. And he can fly the hell out of almost anything. One of the only, if not the only African American helicopter pilots flying film, television, music video, and commercial production jobs in the entertainment industry, Petgrave (he prefers to be referred to as Robin) is steadily breaking down the diversity barriers.

So what is Robin up to when he’s not flying stuntmen around? Keeping an eye on his reinvention of the helicopter tour industry and mentoring economically deprived future aviators between the ages of 8-21. As a way of giving back, Robin donates most of the profits from Celebrity Helicopters to Tomorrow's Aeronautical Museum (T.A.M), one of the only interactive aviation museums in the United States that offers hands-on involvement with its static displays, virtual reality aircraft simulators, and youth programs. T.A.M. is also endorsed & supported by L.A. Mayor Jim Hahn, Speaker of the California State Assembly Honorable Herb J. Wesson, Jr., Senator Debra Bowen, Congresswoman Juanita Millender McDonald, Councilman Bernard Parks, Sheriff Lee Baca, Compton’s Mayor Eric Perrodin, Compton Unified School District, Sergei Sikorsky, the Tuskegee Airmen, Power 106 & Knowledge Is Power Foundation, Home Depot, Boeing, Northrop Grumman, and many individuals.

Because he loves flying so much, it is a gift he would like to give to potential pilots. T.A.M. is a non-profit organization that gives Robin the ability to realize this gift. The museum has established an Aviation Explorers program that encourages interest in the field of aviation by providing scholarships and allowing at-risk youth to learn responsibility and to care for the community by washing aircraft, airport upkeep, facility maintenance, setup computer labs at local schools, and volunteer for flight training credits. With the guidance and support from the Tuskegee Airmen Los Angeles Chapter, T.A.M. also provides a historical journey through aviation.

"Since 1994, Petgrave has dedicated his life to mentoring and outreach programs. Another one of his projects is “Positive Vibrations,” where he lands his helicopter on school grounds and delivers motivational speeches for kids. His extraordinary ability to reach and motivate children has inspired many of them to work harder at school and better their lives." -Plane & Pilot magazine-

On any typical day in between Positive Vibrations school visits, Celebrity Helicopter production gigs, and helicopter tours, Robin can be found giving inspirational speeches to groups of up to fifty kids in the museum’s 7,000 sq ft hangar, on the ramp in front of one of T.A.M.’s static historical aircraft displays, or in the state of the art virtual reality computer center. Talking to kids is important to Robin. “Maybe it’ll make a difference and one of them will go on to do better than I did.”

Robin formerly owned and operated Bravo Helicopters & Wing out of the Torrance Airport for 10 years. He began with $300 and an attitude, and developed it into a 3.5 million/year powerhouse.

Before he launched Bravo, Robin had already won praise as an actor and been a world-class runner who, due to an unfortunate accident, just missed making his mark in the 400-yard hurdle and attending the 1984 Olympics. Robin received his Bachelors of Arts degree from the University of Connecticut in 1985. A member of the Screen Actors Guild since 1979, he has acted in films, TV shows, and commercials and now enjoys the opportunity to showcase his aerial photography and stunt flying skills in the same medium. In February of 1999, Robin was featured on Oprah with other entrepreneurs and their rags to riches success stories. You may have also heard about Robin in the L.A. Times, Daily Breeze, In Flight USA, Black Enterprise Magazine, Essence Magazine, Entrepreneur Magazine, Plane & Pilot Magazine, Fox Television, Black Entertainment Television, Making it, and many more.

“Resolved by the Speaker of the California State Assembly, Herb J. Wesson, Jr. Whereas, Robin Petgrave is the quintessential American success story and he has transferred his entrepreneurial success in the private sector to a philanthropic success in the public sector to empower and encourage youth through the medium of aviation; that Robin Petgrave be recognized as one of the most important and influential California citizens in his capacity as an entrepreneur, youth mentor, and positive civic presence,” Members Resolution No. 3319.

To view all the movie credit for Robin Petgrave please visit our Credits section.